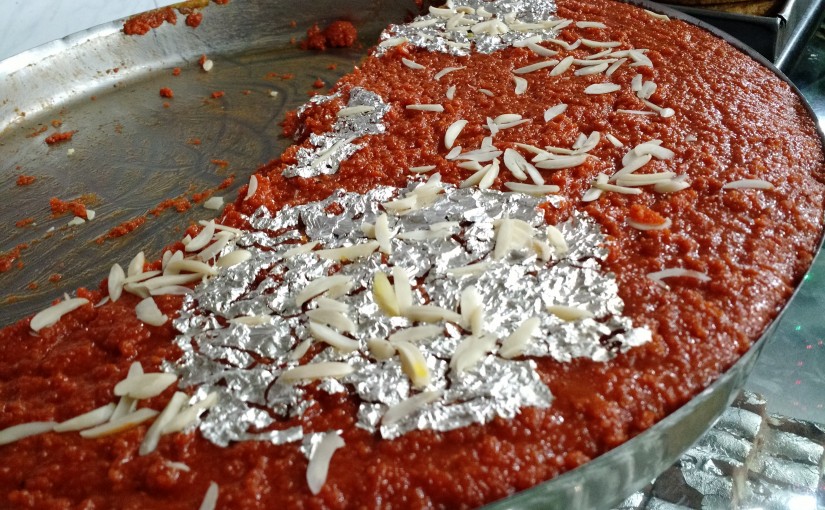 Mazhar quietly sits behind his desk as crowds drift in to his shop, some to have a taste of the famed Jauzi ka Halwa and other for a takeaway back home for some of the best sweets being made at his shop. The shop, a 100 year old history to it looks old and run down and is bang in the middle of the Nampally Traffic Street in Hyderabad.

But the quality of the sweets and no compromise of the items being dished out from his shop which is still a favorite with a lot of the Hyderabadis.
Way back in 1915, a young boy Mohammad Hussain from Turkey decided to set up a sweet shop in Hyderabad. There weren’t any proper roads then, no street lights for illumination. This didn’t stop him from setting up shop in Nampally which was going to transform as on the busiest localities in the modern Hyderabad. He sold all kinds of sweets, but the one that caught the fancy of the people was the Jauzi ka Halwa made with a specialty spice from Turkey called Jauzi. Soon people started thronging in and the news of it reached the ears of the then Nizam (Last Nizam) who himself came down to taste the sweet at the shop.
The shop was obscure, small and didn’t even have a name to it till then. The Nizam was so astounded by the heavenly taste of the sweet that he announced that the shop be named after the nickname of one of his sons. A poster of the letter from the Nizam is displayed at the shop.
The specialty sweet of Hameedi Confectionaries is the Jauzi ka Halwa which isn’t for the light-hearted. Made of loads of ghee and consisting of sprouted wheat flour (samnak), milk, saffron, kewra water and the spices used primarily are Nutmeg, Mace and Elaichi. The halwa is packed with an insane amount of ghee though is a little lighter on the sugar quotient. They also have a Special Jauzi ka Halwa which has double the amount of dry fruits, double the ghee and priced a little more than usual. A lot of effort goes into cooking of the Jauzi ka Halwa which requires a minimum of 5-6 hours of cooking time.
This place is a part of the Hyderabadi heritage in itself. When going over the Hameedi don’t forget to try their Badam ka Halwa and Motichur Ladoo too which are insane. They also make other Hyderabadi delicacies like the Osmania Biscuits and the famous Dum ka Rote. Head for a trip down to Hameedi to savor some of their delicacies and you won’t be disappointed at all.